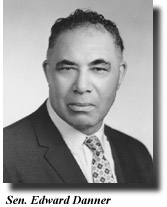 Omaha Sen. Edward Danner was the lone black legislator in the Nebraska Unicameral during the U.S. Civil Rights era of the 1960s.

"His efforts have not only benefited the black Nebraskan," said Gov. Norbert Tiemann at Danner's funeral in 1970, "but have also served to make the white Nebraskan aware of the needs of his black brothers."

In 1963, Danner's first year in office, he co-sponsored legislation that eliminated provisions in law that made interracial marriages void and the children of those marriages illegitimate. The measure was passed on a 29-12 vote. His predecessor, John Adams Sr., had originally introduced similar legislation in 1957, but it was killed in committee.

Also in 1963, Danner introduced bills that would have made it illegal for landlords and employers to discriminate against tenants and job applicants on the basis of skin color. The Fair Employment Act was killed during final reading, and penalty provisions were removed from the Fair Housing Act, leaving Danner no choice but to have it killed.

"Please do not continue to act as if there are no problems in this area," he urged senators. It is impossible to "live decently and respect the law when you are hungry," he said.

Upon the failure of those bills, Danner introduced a resolution calling for the formation of a state civil rights commission to study discrimination. Danner later withdrew the resolution, which was intended to force the governor to appoint his own commission.

Danner spoke at Lincoln's first civil rights march in 1963, which followed the failure of the fair housing and employment bills and the death of civil rights activist Medgar Evers.

He also made headlines that year for being refused service at a Lincoln cafe, where a waitress told him and a minister that they would not be served because they were black. The incident brought a governor's inquiry and a public apology from Sen. Jerome Warner of Waverly on behalf of the community.

The Federal Civil Rights Act was enacted in 1964 and several states followed with their own legislation. In 1965, Danner's bill creating Nebraska's Fair Employment Act was passed, as well as a bill he introduced prohibiting real estate agents from practicing racial discrimination. But his legislation mandating fair housing practices was killed in committee that same year. Danner was a co-sponsor of the fair housing practices bill that was finally passed in 1969, which established the Nebraska Equal Opportunity Commission to investigate civil rights violations.

Danner was born on Feb. 14, 1900, in Guthrie, Okla. He worked as a butcher and served as vice president of United Packinghouse Workers of America Local 47.